From Helpful
(Redirected from Tmux)
Jump to: navigation, search

Note: For something similar for X11, see xpra

You can open a shell (sets of them, in a lot of practice) that sticks around, and that you can reconnect to later.

It's useful for leaving work open, and avoid processes broken by being cleaned up with the terminals they started from.

Do stuff with it.

e.g. by closing the terminal window you're currently using (to simulate a broken network connection)

Of these two programs,

screen is the better known and more likely to be installed. It's a fairly stagnated project now, though.
tmux is more actively developed, so has a few more features.

Screen and tmux distinguish themselves from a regular shell in a few significant ways. 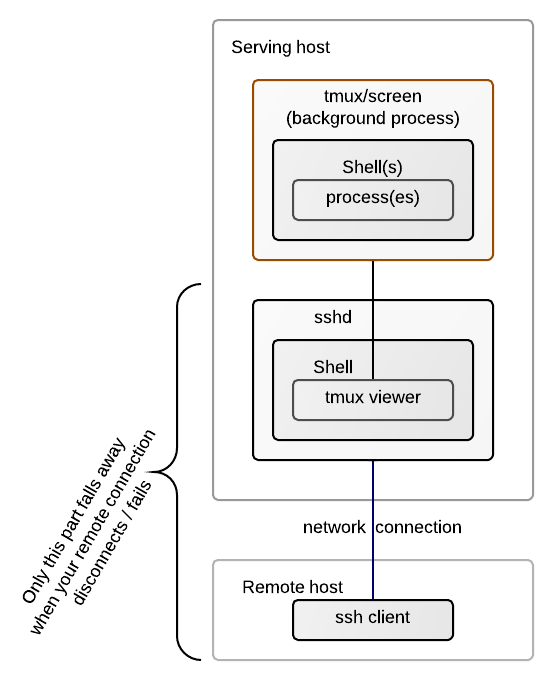 One of the most complex cases in too much detail.
Much of the point is that the process's terminals are tied to the background process, so anything else (SSH connection, viewing terminal) breaking has no effect on the real process

Terminal multiplexing means they can host/view many process at a time.

It means one hosted session can contain many interactive shells side by side, analogous to a tabbed web browser.

Switching between them mainly just connects the keyboard/output to specific ones.

They run processes separately from the shell you logged in with

Each window you start within that service defaults to start its own shell. The viewer just between these windows

The service connects the input/output streams to that client when you need it. When said viewer stops, it doesn't affect the processes -- they were only ever inputting/outputting to the service.

This is useful for anyone who who runs long-term jobs, wants to leave work around, has an iffy internet/WiFi connection, wants to leave (text-mode) editors open to continue with tomorrow, or whatnot.

For contrast, the usual case is:

A program is a child of a shell, that shell is the child of either the graphical terminal, or sshd or such. When the last stops, all proceses under it gets cleaned up.

You can get some relief from nohup. Instead of said cleanup, the process is moved to be a child of init instead. Manually tying those to an interactive terminal again is probably possible, but a pain at best, so you don't really want this for interactive stuff.

Additionally, because the other issue is that your process's stdin, stdout, and stderr (keyboard input, terminal output) are typically tied to the shell you started it in. When one of those streams gets disconnected, the program tends to not deal with that and crashes.

Again, nohup gives some relief, disconnecting input and streaming output to a file, But again, nothing interactive.

Closing/removing a window is often done by exiting the shell. (If something is hung in it, you can kill the window explicitly)

Prefix is Ctrlb by default, but you may want to change it to Ctrla to avoid confusion when you're on a host that only has screen. Because that will happen. (For the same reason, I like to rebind keys so that overlapping features have the same keys. See the example config below.)

Tmux when compared to screen

From those who know screen, the difference is mainly:

My switch from screen to tmux went surprisingly smoothly once I rebound keys to imitate screen :) (see below)

Multiple sessions can be useful, say, to split work and home use.

Within a client/session you look at one window at a time (named, fixed numbering, often switched to by index).

Windows can be split into panes if you think that useful (numbered by current position, can be cycled through).

Interaction I use most

There are plenty of cheat sheets out therem.
The way I use it most of the time:

tmux's Prefix is Ctrl-b by default, but most people (apparently including the tmux devs) seem to remap it to Ctrl-a so that your screen-related muscle memory works. (For the remapping mentioned here, see the config file example somewhere below)

By default it will leave other connected clients attached (and use the smallest window size of the set, padding the rest). If you want it to detach other clients after attaching, the easiest way is probably
tmux att -d

There's also searching and copying, but I haven't use it

More on panes and windows

Note: Tmux 1.7 added a bunch of interesting settings, but using this config in earlier versions will cause complaints. (only later versions report their version (-V ?), so you may have to look at your package management to see which version you have installed)

Special values in titles include:

You can also use strftime variables. Keep in mind those start with a percent sign instead.

When doing complex things, it may help to know that #[] is interpreted after all other # sequences.

Color based on host

That is, have the bottom bar colored according to a hash of the hostname.

This can help lessen confusion of which host you're on, when your job is administering many.

See e.g. the solutions at http://unix.stackexchange.com/questions/122508/set-tmux-status-line-color-based-on-hostname

On status lines and titles

comes from multiple places, including window titles and configured things

What it exposed in its own status line is controlled via: (verify)

(checks via termcap; uses tsl, fsl)
(does this set tmux window title, or its terminal hard)

The interesting part is the difference between contained-term status and window names (and pane titles).

Primarily that each window (though you'ld usually control this globally) has settings:

whether to rename a window automatically (using automatic-rename-format)
disabled after an explicit name is set (...at start via new-window or new-session, or later with rename-window)

(in 1.6..1.8, current pane command was the only automatic-rename behaviour there was)

don't listen to escape sequence in contained terminal(verify)
(does it also disable automatic-rename? or imply it?)

(versions matter because most things are on older versions still, e.g. AOTW RHEL seems to be on 1.8, Ubuntu on 2.1)

...even after you've manually set a name, it's not automatic-rename but your contained shell doing so.

In my case it was RHEL's /etc/bashrc trying to help screen (and the issue is arguably tmux pretending too to be a screen-type TERM) by setting:

The fix would be removing that.

It's a little verbose to do directly, perhaps, so you may prefers some code wrappers e.g. this python library.

Control mode is tmux itself exposing a basic text-mode protocol, separate from the sessions it manages.

It is meant to let programs automate use of tmux, as well as be able to give you some (asynchronous) notifications.

It can also be used for better UI integration - see e.g. what iTerm2 does.

The distinct things within an instantiation of screen are called windows.

By default, each window starts with your default shell, so each window is useful for a distinct task, say, running and editor, running a program, viewing logs.

Window-related commands you may well use:

You may like to have an on-screen list of windows. See configuration notes below (or look to byobu).

To start a screen, type
screen
. This starts a new screen process and creates a single window inside it, with a shell according to your user settings.

Most commands are Ctrl-a followed by something. For example, help is Ctrl-a, h

The usual way to stop a screen by stopping the processes from its last window (or, if you can't easily stop the contained process, kill that window - Ctrl-a, k).

You detach (disconnect) from a running screen instantiation with Ctrl-a, d.

Reattaching comes in quite a few flavours, though out of habit you'll probably remember just one or two convenient ones.

If you don't want names like 5730.pts-0.hostnm, you can specify your own with -S

As to the different reconnect commands: (verify) (this needs clarification / double-checking)

These can be combined. There's more than a dozen combinations

The key shortcuts I consider useful are:

Copy mode (which doubles as a scrollback viewer):

In scrollback/copy mode, you can:

Screen picks up on locale settings and should just work. If it doesn't, it usually means the locale settings do not handle what you want, or your terminal program is using some different interpretation.

Assuming you want to use UTF8 (and unless you specifically must have something else, you want UTF8), you should generally check two things:

If LANG nor LC_ALL does not mention utf8, you probably have to set up your system first; see Localization,_internationalization#Linux_locale_setting

Alternatively, you can also force UTF8 treatment throughout screen by starting screen with the -U option, but this isn't always ideal (it ignores the context of the system it runs in).

A bunch of configuration possibles

You can create ~/.screenrc to have some settings, for example:

The funky caption line is to show the list of all windows, with the current one highlighted -- because by default it will show only the current window number and name. Example result:

You can do much funkier things here - see for example byobu (formerly screen-profiles).

The hardstatus is a slightly more complex subject. It's roughly a separate string that can be updated via terminal control codes. Your terminal/emulator has to support it, as well as allow setting it.

You can tell various terminals and emulators (particularly graphical ones, e.g. PuTTY, the regular ones in *nices,) to show it. For example, you can alter your termcap with something like:

You can tell what screen should do when hardstatus support is not advertised (via termcap), one of:

Prepending
always
to any of these (alwaysignore, alwayslastline, alwaysmessage) will force the option even if the terminal supports hardstatus. Just always seems to be shorthand for the always variant of the default (lastline?).

You can tell screen to set particular things in the hardstatus. For example:

The hardstatus string line tells screen how to use the hardsatus.

Titles for screen's own windows

While you can set these manually (Ctrl-A Shift-A).

You can also set them via escapes, but the most convenient way for that to work is automatically.

If you want to also show things like the current directory, the place you probably want to send those escapes from is the prompt string.

"Attaching from inside of screen?"

Note that if you see "Attaching from inside of screen?", you probably did a screen -rd (or so) from within screen.

It says this in the screen you tried to do it from - so if you did a -rd or such, you'll only see it once you return to the screen. (which may be hard to see unless you use a caption-like thing to help you see when you're in a screen session)

In the case where you (implicitly or explicitly) referred to the screen you were in, in which case the net effect is that you will be disconnected (you'll see [remote detached]), and you will see the "Attaching from inside of screen?" message once you (re)connect to that screen.

Can be enabled/disabled with Ctrl-a f. If that solves your problem, you can disable it for all new sessions via screen config:
flow off
and/or
defflow off

Screen will mess with SSH tunneling of X.

Once you reconnect to screen it will contain the DISPLAY inherited from the shell you started screen from, which will likely result in a:

The SSH client did set the new X tunnel in the connecting shell's DISPLAY, of course, so you'll have to update it manually. Basically:

The problem is that the permissions on that pseudoterminal do not include you (even if you're root(verify)).

An
ls -l /dev/pts
will probably show something like:

To work around this, you can do:

It's insecure, but useful enough for, say, an admin checking up on screens before rebooting.

If you su'd to a user you want to actively use for a while, you may like workarounds: