The most common washing machine odour problem is solid and liquid soaps/detergents that stay behind, and combine with soap-liking bacteria. These ten to thrive under wet conditions.

Some detergents have enzymes that may help prevent this(verify).

Occasionally washing with a high temperature will also avoid bacterial problems(verify), and cleaning any heaped-up soap residue you can get at also helps.

Particularly in the case of powder, large clumps get left behind largely when you use way more than necessary.

Leaving the washing machine door open helps keep it dry when not used. It may not fix the issue when you wash a lot, but at least doesn't encourage it if you don't.

A highest-temperature cycle with soda (and no clothes) tends to go a far way.

A does cleaning heaped-up soap residue from any place you can reach.

Brushes are carbon/graphite blocks that make good electrical contact sliding against a rotating commutator, used in most washing machine motors.

(...though not all. While universal motors are common in washing machines, some recent designs, e.g. direct drive (named for contrast with belt drive) are often brushless designs.)

Because of friction, brushes wear away over time - often years.

They are also usually made to be replaced, easily giving the motor another few years of life.

In washing machine motors they are often positioned to be quite easy to replace.

You'll often need little more more than a screwdriver, and half the work is probably in trying to make sure you're buying the right replacement brushes. (and most of the other half is just mechanical awkwardness)

Modern washing machines may detect (nearly-)finished brushes, and indicate it via a specific error.

If they don't, behaviour can help point at brushes.

It may start its program (usually pumping out water, and letting in water), but then not turn when it should, seem to turn slower, or be somewhat jerky.

It may also affect the spin cycle, while regular turning still functions.

Also, brushes are fully worn, the contact between brush and motor becomes poor any you may get sparking and a slightly burned smell. This generally only happens when you've spent some weeks or months ignoring that it doesn't working very well.

Note that not moving even a little can indicate worn brushes, but also has other causes (like faults in the controller or wiring). 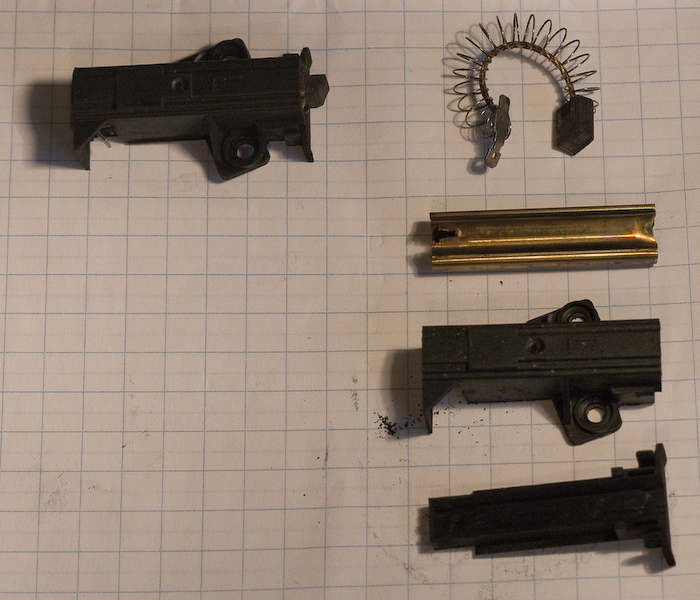 The nearly worn-out brushes from a motor, one taken apart. The brush is the black bar on the spring.

While still assembled because it'll eject all of the brush that is in there, because of the spring.

The brush housing starts mostly full of brush, so almost a full length extends from it.

Once very little extends from it, the spring may no longer be pushing it on reliably - which is the issue.

Where to get replacements

You can often get the

check that they are going to fit - including the length of the holder and the brush+spring.

may be easiest to identify, but often unnecessarily pricy

It seems that brushes without holder are on the order of 20EUR per pair, with holder it's often around 40EUR.

It varies with brand, type, and on whether you're buying off a spare parts site (easily double, those guys like their profit margins), or places like ebay (easily half). Brushes on a motor (top and bottom, the things with the letter L on them). There are a few common brush housing looks, this is one of them

The basics are the same everywhere. You can do without a manual, but it can help ensure you're doing it right.

For modern machines you may sometimes want to tell it you installed new brushes. It's worth checking the manual for this reason.

Given the brushes are made to be replacable, taking them out is often a matter of disconnecting the wire, and loosening two screws, and sometimes a clip or such.

In various cases the motor is exposed enough that you can get at both brushes without taking out the motor.

In others, you may need to take out the motor to get at both brushes. If so, try to remember how the belt was attached and how much tension was on it, so that you can place and tighten it properly later.

(if you've done diagnosis by taking them off, you'll already know most of this)

New brushes may well be locked inside their holder to protect them from breaking while not yet installed. If so, you'll have to release them.

If your washing machine automatically detected the brushes were worn, it may keep insisting you replace themuntil you reset it. Do web searches to find out the precise buttons to press for your machine.

After you've replaced the brushes, it will take a little use before the brushes wear in to have the exact shape of the thing they're on (the commutator).

Until then you may get some sparking, causing that typical electric smell, and it'll probably start to make the commuator look sooty. This is fine, as long as it lessens and goes away.