Difference between revisions of "Electronics notes/Knobs and dials"

Variable resistors (see potmeters), many of the ones with a knob are single-turn, meaning they go though their resistance range in ≤ 360 degrees.

Servos use a potmeter as a sensor, so you could solder wires to that potmeter.

Mostly makes sense to do to continuous-rotation servos (or servos you've hacked that way), and/or when you also want to still use the servo (because otherwise it's just a pricier pot)

(...but manually turning the servo is likely to damage said gears, particularly for higher torque gearboxes, particulary for cheap plastic ones, so in general this is not very useful).

So possibly consider continuous pots, even if they're not necessarily cheaper.

Incremental encoders, a.k.a. Relative encoders (only) report/detect change in position, from which you can calculate direction and speed. ...assuming you're sampling fast enough to not miss transitions.

quadrature encoding in a disc

e.g. a disc with just slits, and two sensors side by side (e.g. in opto-mechanical mice)
a quadrature encoding disc

The two are effectively the same in terms of what you do with the output. The rate of changes is the speed, and you can tell direction by which leads the other. This video is a decent indication of what happens on these two outputs. 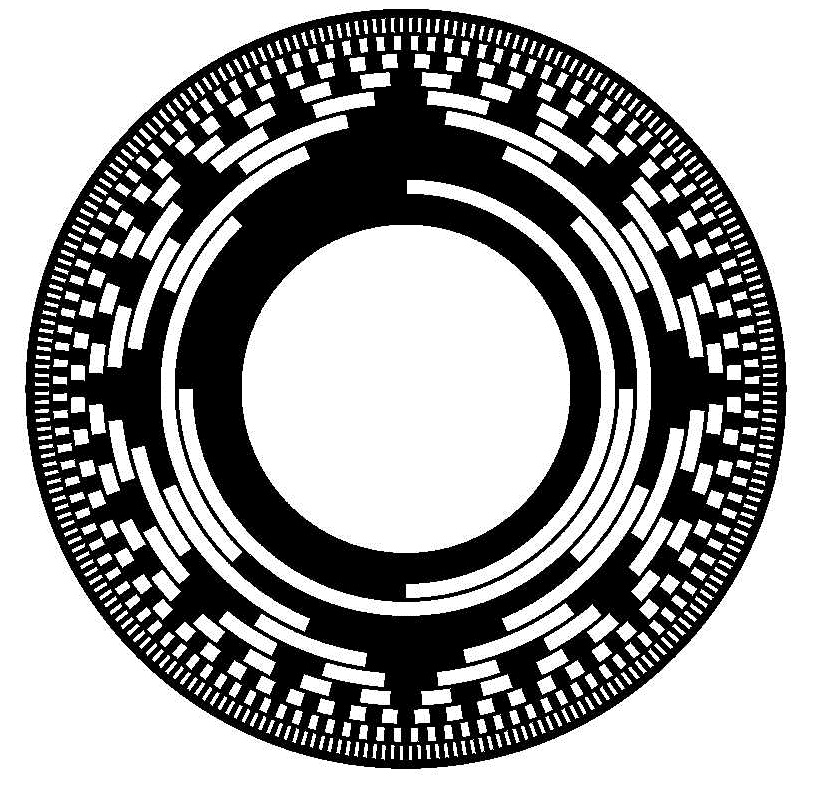 Absolute encoders report their actual position, from which you can also calculate direction and speed.

You can see these as encoding their position as an integer, but they're actually Gray code, more useful in this context because it lets you detect (and potentially correct) successive values that don't make sense.

When using switches as input

With most switches, one of the switch states will mean a broken circuit. When this is sensed by ICs or amplifiers this means a floating input and implies unpredictable behaviour.

In some PICs (such as AVRs in Arduinos) you can enable internal pullups via code, which means you don't need to add a resistor to such a circuit.

The mechanics in almost all switches means their contacts will physically bounce a few times before settling - called contact bounce.

Since most buttons are pulled down or up, this means fast switching in the electrical sense as well: a very quick alternation between contact and no contact.

In buttons that you have to hold down, noisy variation may also happen on movement, as the contacts scrape over each other.

Say, if you're switching on an IC, it may not like bounce on its Vcc, or some of its inputs.

You may not want that to happen

you may accidentally find in the state it mostly isn't in and do something unexpected.

many are variations on the idea that it should be in actuated state most of the time
and before you start storing a history, note that a simpler way is to count up or down depending on the last sensed value.
this will react more slowly - but for most human-operated switches, few-millisecond reaction is enough

and there is sometimes some latching solution you can get from logic. This will have basically no latency, but take a few more components.

for example, and RC circuit

the idea being is that if it must charge to the pressed state, it only matters that it's mostly being pressed

this will react more slowly - but for most human-operated switches, few-millisecond reaction is enough
note, however, that this only lessens the problem, it doesn't fix it entirely, because there is no hysteresis or latching in there, so there will still be a threshold around which it'll flip-flop (depending on the exact circuit)

TODO: write up a fuller explanation, including common mistakes

There are further considerations:

e.g. consider a pushbutton off until it's fairly consistently on
but beware of variants of that code that will effectively debounce in one direction but not in the other.

particularly if you act only on the rising edge

Switches, buttons, toggles, and such

Bistability refers to switches that will rest in both states.

It could be both a mechanical and electronic descriptor, though on the mechanical side it's often called latching, or some such term, whereas a monostable would refer to what most relays do (the term "monostable switch" would be rare because we have words like "momentary" and "pushbutton").

...so the terms monostable and bistability are usually about electronic switching, e.g. to pointing out e.g. that

The distinction between buttons and switches is not more pragmatic than it is hard/strict. Can be a pain in webshopping :)

Contact bounce indicates the time in which an arriving contact mechanically settles and in which the connection is not yet stable. See some images. This bounce is often tiny, both in movement and time.

This bounce is rarely important when driving resistive loads, but in anything more complex there the reaction to the bounce itself can matter.

For example, a digital system observing/sampling it may see very fast switching back and forth.

Some components, such as ICs, also don't deal too well with bounce on their Vcc. A bypass capacitor helps here, and is nice for its power stability anyway.

Switches that are typically in one state (in the case of buttons will probably return there, rather than be toggled) can be referred to as Normally Open (NO) and Normally Closed (NC)

If it has contacts for more than one state (which, when one state is most natural, can be termed NO and NC contacts), the switch is termed Changeover (CO) (also Double-Throw, implying a typical two-state switch, Triple-Throw, etc.).

Changeover switches can be:

Depending on what exactly you want to do, poles and throws can matter when buying a switch.

Amount of poles matters to whether you want to do something with one state (e.g. powered or not) or with both.

Amount of throws matters when you want to control things independently from the same mechanical switch (without digital logic doing it for you). Consider that a car's emergency light switch turns on both turn signals without tying them together electrically.

In some constructions, both matter. Consider multiway switching. 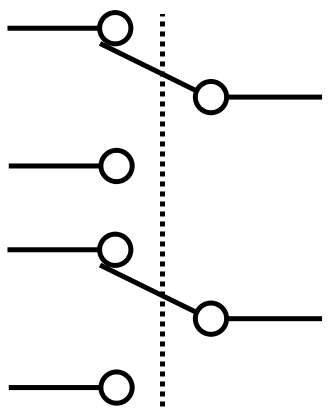 There are further variants of design.

A relay is an electronically controlled switch.

One circuit can switch a electronically separated circuit, useful when they deal with different voltages and/or different orders of current, a connector that may accept varied devices, as part of process control, as part of safety design, and more.

They are often called just relays, or EMR in contexts where SSRs are also relevant (like here).

EMRs may need need on the order of 20mA-50mA to be held well, more when switched from lower voltages, less from higher voltages.

Also, EMRs are largely coils, so are inductive elements that present flyback on their input terminals.

...so if they are switched from ICs or such you will want to sink that spike elsewhere. Circuits with ICs driving them regularly use a transistor (sometimes an optocoupler), and not unusually something (probably a diode) for flyback protection of that transistor/optocoupler.

(Reed relays can switch faster than regular coil relays, but have a current limit that is often on the order of half an amp tops)

SSRs use less control current but run hotter overall, due to their semiconductor nature (for safety's sake assume approx 1W of heat per 1A drawn, but usually noticably less), so you may need a heatsink or risk thermal runaway (read: smoky melty problems), particularly in already-warm conditions.

Not all are created equal. The physical design will vary with the voltages they are intended to switch.

In particular, most are at most line voltage, because arcing is harder to design away at kilovolts. On the other side of things, lower-voltage-output relays can switch faster because they barely have to think about this issue.

On a related point, when switching significantly inductive effects, you will briefly see larger currents and voltages (the inrush current of the load).

This is one reason a relay's maximum rated inductive load is much lower, often well under half the rated maximum resistive load. This too depends somewhat on the voltage.

For example, the one I'm holding right now is rated for 10A (at 125VAC and 240VAC) for resistive loads, and only for 3A for inductive loads.

There is also a difference between whether it's switching AC or DC. Because DC can sustain an arc longer, DC is derated more(verify). Check the datasheet, the ratings printed on the relay may be correct but less complete.

Hot switching refers to switching a mechanical relay while voltage is applied, and it's the condition that produces arcing and wear.

Cold switching refers to applying voltage only after a relay switch.

Cold switching is possible to design into some test equipment, and sometimes useful to concentrate the wear in a predictable place, but in general many uses of relays will be hot switching.

Some designs may be DC-only or have other DC/AC footnotes.

SSRs seem to often be either

...with optical coupling for isolation.

Comparison between SSRs and EMRs

SSRs can switch at perhaps 20usec..10msec. That said, ones that have zero cross switching are by definition slower.
EMRs at order of 50ms and wear faster in the process

so they don't pollute the waveform as much(verify)

and, when hot-switching, arcing, welding, and shortened contact lifespan
this is worse on inductive loads

larger EMRs have to push larger contacts
SSRs are higher resistance by nature, so use a few times more hold current

in particular, SSRs are more likely than EMRs to fail closed, which can matter a lot to safety

yet there are conditions that kill SSRs faster than EMRs.

so cooling them can matter

Voltage surges, momentary shorts, inrush, and (for some) the polarity of what it's switching matters. Which means that EMRs can be preferable for components (motors, transformers) with high inrush current(verify).

You can generally assume EMRs have on the order of 100K switches in them, varying with quality, how near their current rating they are being used (you might get a spec that says 1M at negligible current, and 10K under significant load).

So assuming a few to a few dozen switches or so per day, they should last years to decades, though in some certain fast-switching uses (e.g. industrial machine control) that might reduce to months so you might want SSRs (with the exception that SSRs may fail on, so which you may want to back up with an EMR for safety and other such interesting implications)

For example, for a given relay the resistive rating may be 5A and the inductive rating 2A

Solid-state relays are nicer in many ways, but have some different considerations related to failure - e.g. surges, large inrush, and reverse voltage, and may be a little more temperature-sensitive.