Packages refer to the specific design and size of something a particular component is housed in.

You will often see specific component types (and particularly specific models) in certain specific packages/mounts. For example, transistors are often seen in SOT or TO, diodes often in DO, LEDs often in what seems to be called T1, and so on.

Pitch refers to the spacing of pins (more often mentioned in through-hole components, as those are fairly wide-purpose, while suface mount components tend to be more specialized packages)

There are a number of different measures that can be relevant in addition to pitch. See for example http://en.wikipedia.org/wiki/List_of_electronics_package_dimensions#Through_hole_pin_dimension_reference

There is a noticable distinction in through-hole versus surface mount:

SMD (Surface Mount Devices) and SMT (Surface Mount Technology) refer broadly to not using holes, often with leads that end flat on the circuit board, to be soldered in place. SMD seems to have become popular since approximately the eighties. There are SMT variants of ICs, resistors, capacitors, and various other sorts of packages.

SMD/SMT can be seen as the top of a hierarchy of a lot of other acronyms and a buttload of specific packages.

The older style it is replacing has been (retroactively) named though-hole technology, occasionally abbreviated to THT.

TO, SOT, SC, some small SMD

TO, SOT, SC, SOD refer to a style of making packages, all with quite a few variants, and usually with a small pin-count (often between 2 and perhaps 7, usually between 3 and 6).

While they have names referring to specific uses and sizes (TO: 'transistor outline', SOT: 'small-outline transistor', SOD: 'smal outlide diode'), most of these packages end up seeing many other uses - particularly those packages that handle more than average power (heat).

Note that a number of specific packages have names in more than one of these series.

Many of these are THT, some SMT, some usable as both as they have long pins (some bending involved for THT).

TO is often used when there is power involved (mostly because of the package's thermal capacity), e.g. for transistors, regulators, darlingtons, power resistors.

Specific TO packages include:

A surface-mount package, used for transistors, but also rectifiers, regulators, and more.

There are quite a few variations, many with pins that are wider for better heat transfer.

SC looks like SOT, but has thinner leads (verify)

You can use headers as SIP package

Single Inline Package. Regularly 0.1" pitch. Hardly a package at all. 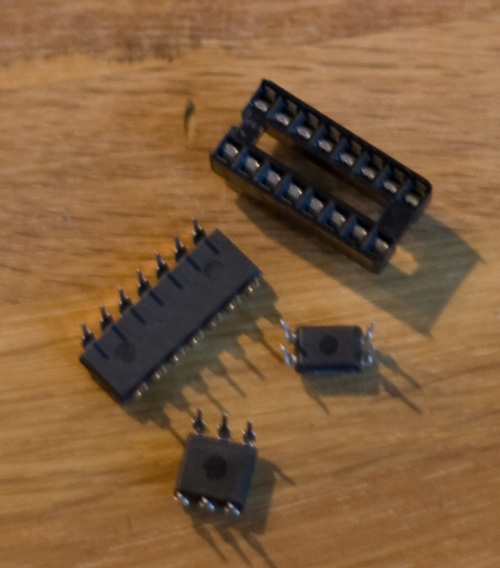 DIP (also DIL): dual in-line package, usually for ICs which need relatively few pins (up to 64 or so, usually fewer).

Since DIP is largely about pin spacing, many things besides ICs can use or be compatible with DIP, or make DIP sockets useful for other things than DIP ICs.

There are wider variants.

SOIC with J-type leads (instead of gull-wing leads).

Basic pin headers (male), here on the back of a small PCB

Also the things that jumpers (sometimes known as shunts) sit on.

And you could call a row of headers a Single In-Line package (SIP) without too much of a stretch.

PCB headers are a fuzzy, wider concept, and can refer to pin headers as well as many more specific deivations, then often seen in shrouded and/or keyed (notched) form.

One simpler example is KK-family molex, which mostly add bits of plastic as polarity protection but will fit on basic headers as long as they have the same pitch.

Molex actually refers to a company, one that makes a lot of different connectors.

When the name is used to refer to a plug, often often refers to plugs common to the context, such as

With more than a dozen series / subtypes.

Resembles DIN 41651 (IDC and such), but applications are more specialized, and often has more connections (dozens is not unusual, up to over a hundred).

Used by some pluggable rack systems, e.g. VMEbus, which is why a lot of image hits will be the 3x32 variant.

Could refer to any cable that is flat and flexible, but FFC usually refers to a fairly specific type commonly seen in tight spaces such as laptops, phones, printers.

Seen in various colors - transparent brown, gray, black, and others (color can correlate somewhat with size/pitch).

FFC connectors often refer to the PCB sockets that accept the end of these cables, although complex designs may opt for specific connectors that take less space.

Refers to PCBs that have have an edge with regularly spaced traces, meant to plug into a spring connector slot on a larger PCB, or into a cable socket (consider 5.25" floppy drive connectors).

Broadly refers to anything that does many-channel signaling between distinct circuit boards.