(...for the pedants: mainly for 10Base-T, 100BaseTX, and 1000Base-T which are but three of a good deal more methods of the wider concept of Ethernet, but the others are much less relevant to consumer networking) 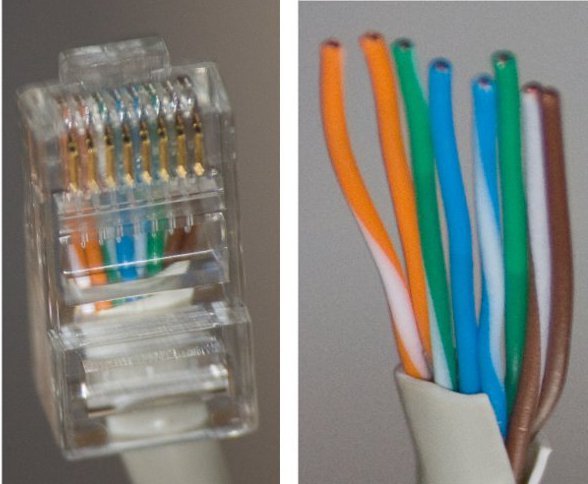 The other type is a crossover cable (568A-to-568B). There were useful in the 10/100 era when switches were pricy, and you wanted to connect a NIC to another NIC directly. Any gigabit-capable NIC can do this crossover internally, making life simpler and these cables mostly unnecessary.

ideally, for ≥1gBit it is suggested that you keep the untwisted length as small as possible, to minimize near-end crosstalk[1]

ideally, the outer insulation should make it into the plug far enough so that the crimping digs into it - this provides a little more protection against pull the cable. which means the wires should stick out ~15mm from the sheath. And you want to do that at this stage, because ordering them will change length a little.

probably check the order again, they may have jumped around, and checking is faster than redoing

most of the time you'll work with solid
(in home use you can often get away with mixing this, in professional use too much of your network may depend on doing one thing properly)

ISDN
RS-232 (varied pinouts)
FireWire
DMX
...and many others. It's a convenient plug.

Notice the lack of dashes; 568-B is the standard that 568A and 568B are part of, 568-A a completely different standard (yes, that's stupidly confusing).

Countries using analog phones with 4P or 6P plugs (in 8P sockets) can have analog phones and FE coexist, because they use only pair 1 (blue, in the center). Large setups can do this to make their wiring simpler
It's also sometimes used for the (somewhat riskier) DIY variant of power over ethernet
on-the-cheap two-pair cables will work in most places, but only because the NICs fall back to 100MBit

If you still want to make one:

Home use is a fairly friendly environment, so UTP (Unshielded Twisted Pair) is typical, and fine for 1gBit in most cases.

Some variants like F-UTP (foiled-whole) is not much more expensive, so is also seen.

Having powerful electronics and sensitive electronics near each other may also cause you some headaches.

The more-letter variants (look like U/STP or U-STP) are more specific (Earlier three-letter acronyms aren't entirely consistent, in part because the naming first got confusing, got used inconsistently, and got changed. Basically, anything with three letters (except UTP) is potentially not what you think).

assumptions you cannot an make when wiring a building.

RJ is the group of plugs that can be described by their positions and connectors, such as 8P8C in Ethernet, while RJ45 actually refers to a specific telephone wiring on the 8P-style plug (probably the most common one among several), while 8P8C refers to that plug itself and no specific wiring. Regardless, most people call the plug RJ45, regardless of wiring.

If more more than the middle two wires are used in telephone wiring, they carry either power, or a second (RJ14) or even third (RJ25) telephone line on the same wire, but consumers rarely see this type of phone wiring.