Firewalling and other packet stuff

for common services, and OSes may deny user programs to listen to these ports, for security reasons (e.g. making it a little harder to replace common services).

most OSes make a split between ephemeral and non-ephemeral
ephemeral is regularly some range within 50K-65K (staying above the IANA registerable range), and most OSes allocate at least 4000 ephemeral ports, so there is usually no need to change this.

your basic workstation only really needs them when making making outbound connections, and often at most a few dozen at a time. Even things like peer-to-peer protocols often don't reach this limit
some very busy servers may wish to expand the range of their ephemeral ports (in part because a port can't be reused for a minute or so due to the TIME_WAIT detail of TCP)

Ephemeral ranges according to...:

In practice, these ranges are not very strict.

Various services choose ports in any of these ranges.

You usually only care about packets following one of these three paths:

usually, INPUT, OUTPUT, and FORWARD are interesting chains for filtering (...different kinds of traffic)
while PREROUTING and POSTROUTING are there for doing complex things such as packet alteration for fun, profit, routing, NAT, and such

Networking is an 'as fast as possible' sort of resource, so rules are compiled to their simplest-to-evaluate binary form of, usually, little more than a few bitmasks and comparisons. Even in the text form you write, they will be mostly numeric already, (Speed is also served by using "use only the first rule that applies, nothing else" logic.

Some of the more complex rules (e.g. l7 stuff) takes a little longer to evaluate, so don't use those when you care about speed. Or at least put all the common fast stuff above them (l7 stuff tends to be fallback rejections).

A slightly longer story; Tables and chains from a few perspectives

Also interesting but not part of the most central terminology:

The predefined chains (and other predefined names) are usually the most useful/important ones to getting packets in, out, and past, and doing so in an understandable way.

While you can customize it (for organization, a sort of conditional logic on streams of packets), in practice people rarely deviate from the images you see around various explanations, like: 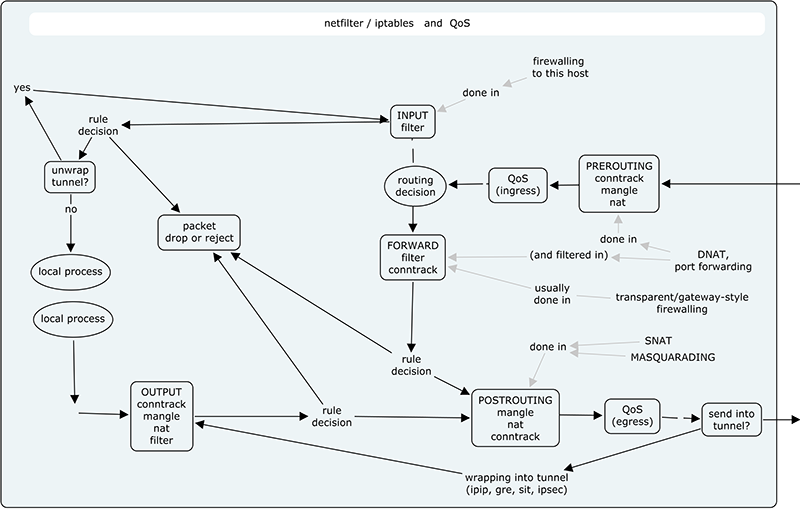 There are some limitations of what type of rules are accepted in specific chains and specific tables.

In the end you're working in a flexible rule system, and it's not hard to create things that make make little sense, are very hard to predict the behaviour of, or are an unnecessarily complex.

Yet most people stick to minimal understandable things, not least because most examples try to be like that.

Probably the three most common paths, in a little more detail:

(note that PREROUTING can divert a packet to FORWARD through DNATting, in which case it's actually the next case...). As such, there is only a difference after PREROUTING -- there is a routing decision there that checks whether the packet is targeted at this node or not, and sends it to to INPUT or FORWARD accordingly.

iptables
is the classic CLI tool to manage netfilter - to the point netfilter and iptables are near-synonyms to many.

The first three are filtering rules (the first two of which are very similar in effect), the last two are more complex.

Let's pick some of them apart.

When creating chain contents, each rule has:

It quite likely has one of the general match options

Many further options are specific values to specify the type of thing you are matching.

Match types are usually a specific type of filter. You can use more than one match in a rule.

Match types are pluggable at kernel/kernel-module level, so may or may not be available to you without a modprobe or some kernel recompilation.

The common match types that you can count on are tcp and udp, and also mport or multiport - these will serve all your port filtering needs.

Since you can construct illogical match combinations, there is the occasionaly apparent redundancy, and there may be dependencies. For example, when using -m tcp (or udp, mport, multiport(verify)), you also have to specify -p tcp or -p udp.

Specified with -m. Many of these have to be compiled into the kernel and some are OS-specific. The most useful are:

Some of the following are generally interesting, a few depends on extra services, and you'll probably never use most:

Targets can be basic chains: (or custom ones)

...and others, various of which may need kernel support.

Note: Some of these have the effect of doing -j RETURN themselves. For example, you can -j LOG and it will continue processing in the chain that -j LOG is in.(verify)

tools to make it easier

rule format and CLI are friendlier than bare iptables

config: main config at /etc/default/ufw, including things under /etc/ufw/ (verify)

Seeing whether your firewall is on, and which you have in the first place

Checking which you have

Since most things manipulate netfilter, seeing something with iptables doesn't tell you what, if anything is managing these. So you have to poke around.

You can check for a service, but that requires knowing already, and I've more than once found a happy started service, (e.g. via
sudo systemctl status firewalld
that had an empty configuration.

Since two common firewalls these days are ufw and firewalld (defaults for ubuntu and redhat/centos/fedora, respectively), try querying their status:

There's a bunch of others, like IPCop, Shorewall, Vuurmuur (and a bunch more network OSes, that is, ones intended to be run alone on network devices, e.g. shielding others. This seems to include e.g. pfSense, VyOS, untangle), but these are more likely to be installed by your admin and you should talk to them.

Note also that older systems had an 'iptables' service that was not a manager, but just ran a script that ran a bunch of "iptables add" style rules (and often saved it to disk when stopping the service, to persist around reboot).

Since basically everything is just wrapping netfilter (and frequently via iptables(verify)), a somewhat better check of actual functionality is to just see the rules currently active within netfilter:

(or iptables-save, but it's just silent when you forget to sudo, and sometimes around SELinux issues)

To also estimate whether it does what you think is to see how many packets/bytes ends up on a rule, e.g. via:

A more thorough check of the same is to (temporarily) log dropped packets, to see whether it's doing what it intends.

(Glossing over a lot of details...)

A simple and common approach is to whitelist things you want to allow, and deny everything else, for example:

iptables keeps track of how much data comes through each chain, and has been handled by each rule. For an overview, see:

While this isn't so useful to do per-host or per-port analyses (there are prettier tools that do that already), it's potentially useful for somewhat more specific checks.

For example, the combination, to get an idea of how much your web server is being served by the LAN, versus from the internet, you can get a decent idea with:

Side note: altering the table seems to zero counters. You and any pretty-graph-makers should probably be aware of that.

(Note that this can also be a lot more efficient than logging, which is inevitably to disk, so you don't want to log everything, so you want to make a little diagram for what it does, particularly if you have any jumps in your rules, etc).

Logging is useful when you want to know more than how much traffic you have for a rule -- or at a particular point in your flowcharty firewall.

You might also look for specific fishing expeditions, such as summing up connections to port 8080 and other common ports, e.g. P2P you do not use, and see whether there are common origins.

Since this can be very spammy, you usually want to feed that into an analyzer. (and, for anything running permanently, maybe not feed it all via disk)

...just before the final reject/drop.

That string is just something easy to grep for.

ULOG can be made to store packets basically as-is, rather than a text summary as LOG does. (It can also avoid syscall overhead)

It usually sends to a ulogd you set up, which decides what to do, which is often to store it in a database.