The classic, seen on thirty years of devices.

This is a fairly standard serial port, in one direction, sending octet packets, at 31250 (±1%) baud.

Each device connection (pin 4+5) is a ~5mA current loop (rather than voltage-referenced), so being able to drive ~5mA comfortably much is more important than precise voltage.

...and in most devices you effectively drive the LED part of an optocoupler, so you mostly just need to add a reasonable resistor for the voltage you have (and the max current your output pin can sink, which these days is rarely limiting).

MIDI cables may only have 3 wires, but might have 5.

This isn't relevant to standard uses of MIDI, since pins 1 and 3 are unconnected in sockets, on both ends.

There are non-standard devices that do use the extra pins, though. 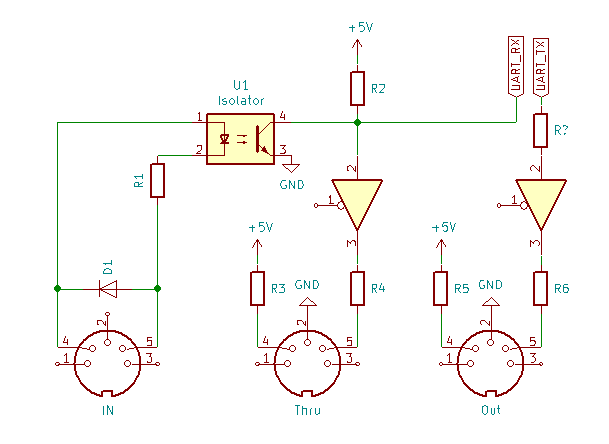 they're in the original MIDI specs because, at the time, many things couldn't directly drive 5mA (and in those specs it's two triangles, because two inversions on e.g. a 74LS14 hex inverter ICs was a simple and cheap solution)
These days you're probably using a microcontroller, which tend to have buffers on each pin that can drive on the order of 30mA, so you could omit this
It's still not a bad idea (ease-of-repair-wise) to protect your IC by using a transistor, though. Same for the diode.

...within the devices, that is. The cable itself should connect it on both ends so that cable doesn't have a direction.
note that the socket on the IN end should not connect the DIN barrel/pin 2 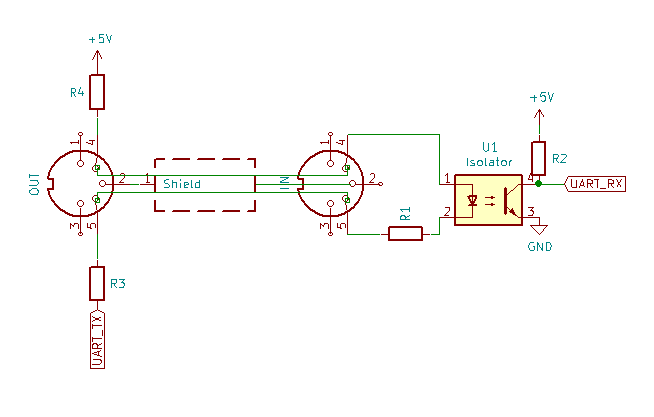 Simplified somewhat, showing wire shield, and drawn to clarify the "you're mainly just powering that LED through a long wire" view.

In a chain, earlier device can play (only) any later devices, because that's the direction messages go.

This means the order devices are hooked up in matters.

And you'ld generally put just-controllers earlier, just-synths at the end.

If more than one playable-and-controllable thing is involved (this includes PC DAWs), you have to think about it a little harder.

There are some footnotes to hardware's sockets. In particular, they may have:

These weren't all wires the same way, so MMA decided to set a standard.

USB-MIDI protocol is mostly modelled on serial MIDI packets, though it adds a few things, like a field called Cable Number, mostly for ease of routing(verify).

Distinct devices connected via USB-MIDI appear as distinct controllers with one MIDI device on them, so there's more focus on routing within the host (usually a PC) than before.

USB-MIDI is part of the USB standard, which means PCs support it easily, but more interestingly that relatively simple simple USB devices and hosts can speak it.

Expect between 3ms to 6ms of added latency(verify) possibly more, depending on bluetooth version and a few other practical details.

If it stays on the low end of that, that's good enough for many uses.

So this amounts to MIDI over Ethernet or WiFi.

(With some additional things like RTP doing automatic retransmission)

On LAN, latency should be about as good as serial MIDI, and it can sometimes be a practical way to link many things together, or do so over a larger distance.

On WiFi you can't really guarantee latency to always stays under an acceptable level, so

best case it just works,
worst case you can't even fix it.

On the Internet you'll have at least your broadband's latency, which is often on the order of ~7-10ms of latency, so ehhh.

Beyond that, the limited need, and the existance of things like it (like OSC), means it's not in widespread use, though there are implementations on many platforms, and a bunch of interesting DIY hardware it's being used on.

Devices can ignore a messy message and focus on a new one immediately, without any state, because the highest bit is set only in the start byte of a message, and additional bytes never do. (The only sort-of-exception is SysEx, which also ends with one, but still should not contain any)

1110cccc 0VVVVVVV 0VVVVVVV
were V is an unsigned 14-bit integer value (0..16384) (lowest 7 bits are sent first)
the halfway value 8192 means no pitch bend.
The amount of tone range that the extremes correspond to is chosen by the listening side

120 through 127 have functions like reset, mute, local control, omni on/off, poly on/off - and are considered channel mode messages, see below
0 through 101ish change how a synth behaves on a specific channel

Control Change are intended as "sent when a physical knob changes".

These were intended to alter parameters of a synth on a particular channel.

Since most synths listen to relatively few,

this is great for mapping knobs to arbitrary DAW functions

basically, local=off says "you, a keyboard+synth, should send notes to MIDI out instead of playing yourself (also still plays what it gets)" (verify)

You may want this for portamento/glissando
and makes sense for some instruments, like guitar controllers

Some controllers and DAWs have a 'panic' button used for "argh I have no idea why you are still making sound, please stop it". This sends 123 and/or 120. And sometimes also NoteOff for all notes, in case a sound producer doesn't understand 123.

all single-byte, no data

There's time/song/tuning stuff is in both these sections, so there's no huge distinction except some scheduling detail (e.g. real-time messages may be sent during SysEx).

MIDI monitors may report all of this as SysEx, just because most of it's special-cased control stuff.

SysEx takes the form of

0xF0 (SysEx start)
Manufacturer ID (1 or 3 bytes), helps synths decide whether it should try to read the message [2]
a variable amount of bytes
0xF7 (SysEx end)

Serial MIDI is fixed at 31250 baud/second, slow by modern standards. Not too bad and was easy to implement at the time.

Sending a byte (counting start and stop bits) takes 320 microseconds, and since messages are one, two, or three bytes long, most things arrive in under 1 millisecond.

Yet wanting to send, say, 10 messages all at once means the last will by physically put on the wire ~10ms later.

There are a few tricks to alleviate this on serial MIDI, including but not limited to:

e.g. allowing shortening of a handful of NoteOns, or a bunch of CCs,
https://www.midikits.net/midi_analyser/running_status.htm

and understood as identical same by most synths

The throughput limit rarely matters to human playing, because our timing is never robotically perfect, and saturating the bus with note messages would require playing so fast it wouldn't be musical.

It can start to matter with

MIDI sequencers, which may wish to send a bunch of things exactly on a beat

but an even slightly clever controller prioritizes note playing higher, so this should not matter

The strongest argument (for something faster) may be Polyphonic Expression (altering parameters per played note), as that is currently often implemented assigning notes and their alterations on channels, round-robin.

again, there are alleviations, but

In USB-MIDI, the data that is transmitted is almost entirely the same, but due to the way it is packed and the higher speeds involved, the latencies don't really add up anymore. (The latency of USB itself is still ~1ms, though, due to the way the OS handles it).

Mackie Control Universal (MCU), and Mackie's HUI, and (also audio IO), refers to a physical controller for DAWs (just Logic at first), originally from the late ninties and originally specific to Logic.

MCU/HUI is for a large part just a specific convention on top of MIDI.

The point of this is mostly to have a standard for all the things it wanted, rather than telling you to manually map lots of CCs to specific controls before anything much worked.

It's implemented mostly in SysEx. While it was kept closed for years, there's decent documentation available e.g. in logic control, MIDI Implementation section.

It allows SMF files to say how they should be simplified to play on devices that make only simpler sounds.